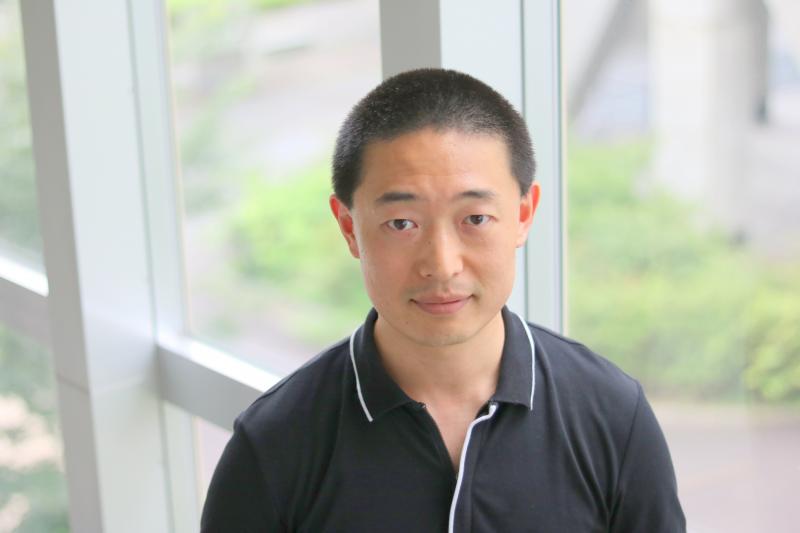 Name: FENG LUO (Theoretical Physics)
Hometown: Xuanhua, Hebei province, China. About a three-hour drive inland from Beijing.
Position: Kavli IPMU Project Researcher
Recommended reading: "Remembrance of Earth's Past", a science fiction trilogy by the Chinese writer Cixin Liu. (Chinese readers generally refer to the series by the title of its first novel -- "The Three Body Problem")
Favorite place in Japan: 100-yen shops. You can buy everything you need, and try new things that you might need at a price that you can afford.

You came to the Kavli IPMU in November 2015, what is it like working here?
I think Kavli IPMU is a super nice place for my research. I do astroparticle physics, and it’s in an interface between particle physics, astrophysics and cosmology. Here in IPMU we have physicists, astronomers, and mathematicians in the same building, so for example, I can easily find an astronomer to talk to if I have something in my mind.

Also, my wife is a mathematician in Germany, but it’s very good that IPMU has many mathematicians because she can discuss and collaborate with people here.

What are you currently working on?
I’m mostly working on particle dark matter on the theoretical side. We only know about dark matter from its gravitational effects, but we don’t know anything about its particle side. So that’s my research.

The primary particle physics framework I’m using to study dark matter is supersymmetry, which is one of the best candidates for the next step of particle physics. The reason I do supersymmetric dark matter is because the framework is beautiful and testable. The Large Hadron Collider is now trying to find supersymmetric particles, and there are many dark matter search experiments, including underground detectors and satellite- and ground-based cosmic ray detection experiments. So we have many ways to test this theory.

So in say, the next 20 years we’ll be able to detect dark matter?
There’s no guarantee, but it’s crucial to have experiments to shape theories continuously, so that we eventually can find it.

For example, 20 years ago people had high expectations that supersymmetric dark matter would be discovered soon after the run of the Large Hadron Collider. But, we haven't found it yet. So we have to rethink and consider where and how the dark matter particle may be hiding in the theory.

In one of my works, we found the maximum possible supersymmetric dark matter particle mass in one of the scenarios is about 8 TeV. The current collider cannot exclude this possibility, but a 100 TeV collider probably can. Although to really have a 100 TeV collider running is still maybe more than 20 years in the future, it’s necessary to study the physics right now, otherwise it probably will never be built, and we won't have the chance to shape our theories. That’s one of my current working directions also.

Can you share your academic background?
In the third year of college I went to a lecture on extra dimensions and gravity, and thought that was interesting. Then I talked to the lecturer and became his Master student. Later I decided to go to the US for my PhD. I went to University of Minnesota. In my first year there, I talked to my then potential advisor, and in the trial period I was given a problem in supersymmetry related also to Big Bang nucleosynthesis. I liked the subject, and later it turned into my thesis.

After I finished my PhD I went to King's College London for a postdoc for two years. Then I went to CERN for one year, before I came to IPMU.

When I was very young, in elementary school, I had a science book that had many subjects: everyday life science, biology, astronomy, earth science, and the science of the human body. I always read the astronomy and biology parts. By the way, it's a book translated from Japanese, with manga for each of the questions and answers. But in college, there were not many astronomy majors in China. There were more biology majors, and I wanted to go to a university on the coast, probably because I liked seafood, but anyway that limited my choice of universities. But unfortunately I didn’t enter biology because my (examination) score was not good enough. Somehow they put me into physics. Later, I found it interesting.

So my career wasn’t a goal where I directly went there. But the astroparticle physics I’m doing is related to astronomy, which is my favorite. It’s a nice combination that I like. If I could include biology I would be even happier, but I don’t know. We’ll see.