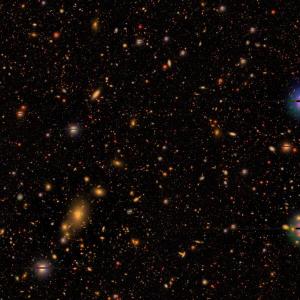 Understanding the nature and origin of large-scale structure in the Universe is one of most compelling issues in observational cosmology. The currently most conventional scenario is given by the cold dark matter (CDM) dominated model, where gravitational instability mainly driven by spatial inhomogeneities of CDM distribution amplifies the seed density perturbations to form the present-day hierarchical structures. Therefore revealing distribution and amount of CDM is crucial to understanding the formation of large-scale structure. In addition the presence of dark energy drives the accelerating cosmic expansion, and therefore affects the growth of structure formation. The dark matter distribution and the nature of dark energy can be explored from massive galaxy surveys.

We have been actively working both on the measurements using currently available facilities and on the planning of future instruments. The powerful investigative tools are the gravitational lensing effect and the baryon acoustic oscillation. Also, the cosmic microwave background (CMB) polarization is a unique tool to investigate the universe in other aspects.

The path of light ray emitted by a distant galaxy is bent by gravitational force of intervening large-scale structure during the propagation, causing the image to be distorted—the so-called weak lensing shear. Conversely, measuring the coherent shear signals between galaxy images allows us to reconstruct the distribution of invisible dark matter. Moreover, since the weak lensing shear deals with the light propagation on cosmological distance scales, the lensing strengths depend on the cosmic expansion history that is sensitive to the nature of dark energy. Thus weak lensing based observables offer a powerful way for studying the nature of invisible components, dark matter and dark energy. We are carrying out observational and theoretical studies of weak lensing phenomena using our own Subaru data sets as well as simulations of large-scale structure.

To measure the expansion history, however, we also need to know how far back in time the light was emitted from the galaxy, or equivalently, how far away it is. Measuring precise distances in cosmological scales is very challenging. Clustering of baryonic matter at a certain characteristic scale that is imprinted by baryon acoustic oscillation (BAO), or propagation of acoustic waves, in the early universe serves as a “standard ruler” for cosmological observations. This technique requires to study millions of galaxies in a wide field of view, and map the spatial distribution of luminous galaxies to detect the characteristic scale.

TThe HSC replaced the prime focus camera of Subaru Telescope (8.2 meter optical-infrared telescope at the summit of 4,200m-Mauna Kea, Hawaii) with a new camera that has wider field-of-view than the previous one by a factor of 10 (nine times the area of a full moon). Fully utilizing the unique capabilities of HSC, its survey speed and excellent image quality, we have conducted a massive galaxy survey from 2014 that covers an area of about thousand square degrees (equivalent to more than 5000 times the area of a full moon) and reaches to the depth to probe the Universe up to redshifts of a few. These provide us ideal data sets for exploring the nature of dark matter and dark energy via measurements of cosmological observables available from the data, weak lensing and galaxy clustering statistics. Kavli IPMU members, are actively involved in this HSC project, and working on the designing and planning of HSC galaxy survey and development of data analysis pipeline.

The Kavli IPMU is a full member of the SDSS-IV collaboration. SDSS-IV is currently conducting the expanded Baryon Oscillation Spectroscopic Survey (eBOSS) to map the distribution of luminous galaxies and quasars throughout the universe. By focusing on redshift regimes currently unexplored by other surveys, the full eBOSS data set will probe structure over 80% of cosmic history and create the largest volume map of the universe to date. These data are being used to understand the nature of dark energy and structure formation over time. Kavli IPMU researchers also continue to make use of the legacy imaging and spectroscopic data from earlier generations of the SDSS collaboration.

Since Jan 2011 when PFS was approved by the community at the Subaru users meeting and the project formally started subsequently, the instrument development and large survey observation planning have been promoted by an international collaboration at the initiative of Kavli IPMU.

This instrument enables to observe max. ~2400 astronomical objects and deliver their spectra over the wavelengths from 380nm to 1260nm in one exposure. PFS on the Subaru telescope is truly a unique multipurpose spectrometer that maximally exploits the Subaru's large light-gathering power of the 8.2m-diameter primary mirror and the ultra wide field at its prime focus.

At the Subaru's prime focus, Hyper Suprime-Cam (HSC) has been operating and delivering superb images over a large area of the sky. PFS and HSC are the dual wheels of the SuMIRe (Subaru Measurement of Images and Redshifts) project to conduct a large census of the Universe. Extremely large statistics of stars and galaxies with HSC images and PFS spectra enable to provide physical constraints on dark matter, dark energy, and neutrino mass from various precision measurements such as Baryon Acoustic Oscillation, and to address the physical processes that originate the large variety of galaxy populations.

The cosmic inflation is one of the biggest questions to be addressed in cosmology. Thankfully the event at 10-38 sec after the beginning of the universe can be experimentally testable by using the cosmic microwave background (CMB) polarization, called primordial B-mode. The past CMB experiments have been providing data to study the physics of early universe. The recent data from the European Space Agency (ESA) satellite Planck has solidified our understanding of Lambda-CDM cosmology. With a rapid technological development for higher sensitivity observations, the community has begun moving even to a deeper sensitivity for the direct evidence of the inflationary paradigm. In addition to the inflationary universe, there is rich physics to learn in the late universe. The CMB photon interacts with the gravitational potential from the large-scale structure, and thus anything that influences to the large-scale structure, such as the total mass of the neutrino, can be probed by the CMB polarization at the fine angular resolution.

The Kavli IPMU is actively involved to the observational efforts that are in progress from the ground and in preparation for a future satellite mission. POLARBEAR has been observing from Atacama, Chile. It delivered the first detection of the CMB B-mode power spectrum originated from the weak gravitational lensing. POLARBEAR2, a part of the Simons Array, is soon to be deployed and starts observing. Simons Observatory is the next generation ground base telescope in Chile. It probes the angular scale from the recombination dump to the weak gravitational lensing in the CMB B-mode power spectrum with high accuracy. The next generation satellite proposal, LiteBIRD, is specifically designed to aim the primordial B-mode signal with the sensitivity of the tensor-to-scalar ratio less than 0.001.

Currently, the CMB group at Kavli IPMU carries out the B-mode polarization experiments in theory and experiment. The 4 faculties and postdocs are actively leading on the projects.