The international HSC team involving researchers from various institutes such as Kavli IPMU, NAOJ, Taiwan and Princeton University are carrying out the large-scale imaging survey of the Universe since 2014, using the wide-field imaging camera, Hyper Suprime-Cam (HSC), mounted on the 8.2m Subaru Telescope that is located atop the summit of 4,200m Maunakea in Hawaii.

This large-scale survey project takes advantage of the photon collecting power of 8.2m Subaru telescope as well as the HSC’s capability to capture a large area of the sky at one time, equivalent to nine times the area of a full moon, and will attempt to take high-quality images of billions of galaxies including faint galaxies in the distant universe over more than 1,000 square degrees of the sky, equivalent to more than 5000 times the area of a full moon. The gigantic HSC data allow scientists to carry out a broad range of topics ranging from small-body systems of solar system, the Milky Way and nearby galaxies, distant galaxies, black holes residing at active galactic nuclei, clusters of galaxies up to cosmic large-scale structure, which are almost all hierarchical structures in the Universe. In particular researchers at Kavli IPMU aim to address the origin of cosmic accelerating expansion from the three-dimensional map of dark matter distribution with unprecedented resolution in the Universe that can be reconstructed from measurements of weak lensing distortion effects on distant galaxy shapes. 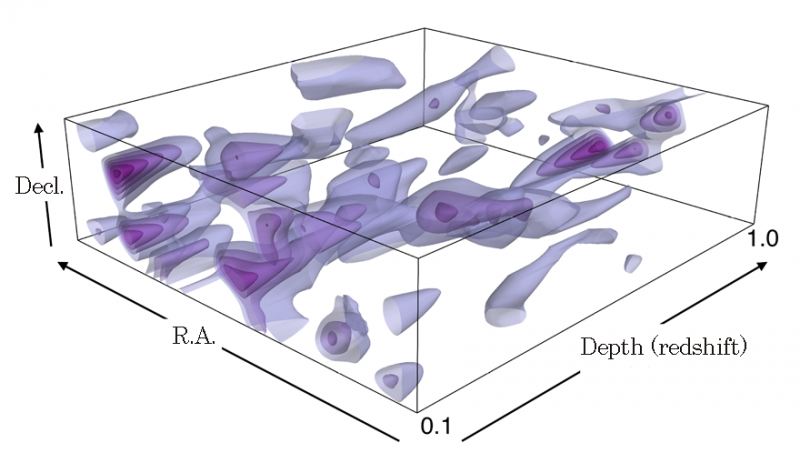