August 27, 2020
Kavli Institute for the Physics and Mathematics of the Universe (Kavli IPMU) 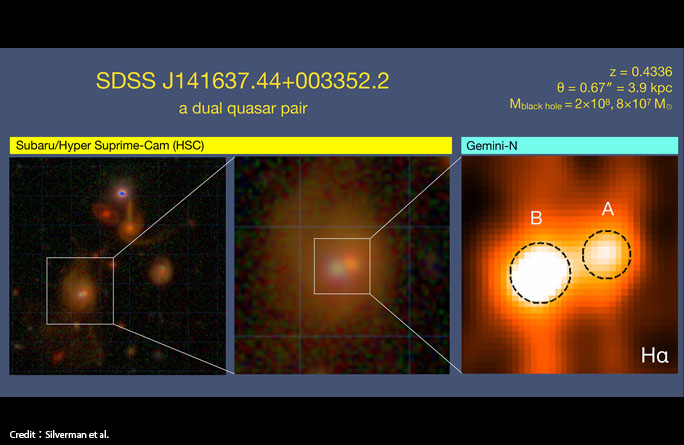 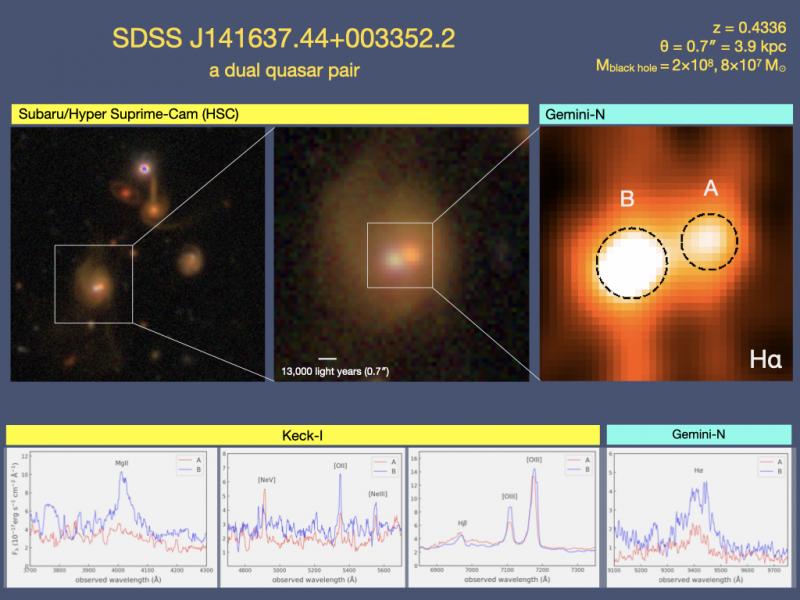 In our dynamically evolving Universe, galaxies occasionally experience collisions and mergers with a neighboring galaxy. These events can be dramatic, causing the birth of new stars, and the rapid feeding of the supermassive black hole that resides in each galaxy. It’s understood that these enormous black holes have masses millions to billions times larger than our Sun and exist in the center of all massive galaxies. As material swirls around the black hole, it is heated to high temperatures, releas-ing so much light that it can outshine its host galaxy. Astronomers refer to this phe-nomenon as a quasar.

Simulations of galaxy mergers demonstrate that sometimes quasar activity occurs at the center of both galaxies concurrently as they undergo a cosmic dance. Such a merging pair will arise as a pair of luminous “dual” quasars. While astronomers have previously found a modest number of luminous quasar pairs, they are rare, much more so than the simulations predict. The difficulty has been not having observa-tions with both the ability to separate the light from the two quasars in close prox-imity and wide enough area coverage of the sky to catch these rare events in suffi-cient numbers.

To overcome these challenges, astronomers are taking advantage of a sensitive wide survey of the sky, using the Hyper Suprime-Cam (HSC) camera on the Subaru Tele-scope, to search for dual quasars. “To make our job easier, we started by looking at the 34,476 known quasars from the Sloan Digital Sky Survey with HSC imaging to identify those having two (or more) distinct centers,” explains lead researcher John Silverman, of the Kavli Institute for the Physics and Mathematics of the Universe. “Honestly, we didn’t start out looking for dual quasars. We were examining images of these luminous quasars to determine which type of galaxies they preferred to reside in when we started to see cases with two optical sources in their centers where we only expected one.”

After a slight modification of their automated analysis tools, the team identified 421 promising cases. However, there was still the chance that many of these were not bona-fide dual quasars but rather chance projections such as due to stars in our own galaxy. Confirmation required detailed analysis of the light from the candidates to search for definitive signs of two distinct quasars. Using the Keck-I and Gemini-North telescopes near the summit of Maunakea in Hawai’i, Silverman and his team identified three dual quasars, two previously unknown: each object in the pair showed the signature of gas moving at thousands of kilometers per second under the influence of a supermassive black hole.  The Figure shows a newly-discovered dual quasar. The mass of each black hole is around 100 million times the mass of our Sun. The companion is redder than its partner, perhaps indicating that it is partially hidden behind other material left over from the collision between the host galaxi-es.

Based on these observations, the team estimates that 0.3% of all quasars have two supermassive black holes in the process of merging. The low fraction exemplifies their rarity and the reason so few were found in past searches. However, Shenli Tang, a graduate student at the University of Tokyo and a project member, points out, “In spite of their rarity, they represent an important stage in the evolution of galaxies, where the central giant is awakened, gaining mass, and potentially impact-ing the growth of its host galaxy.” These results demonstrate the promise of wide-area imaging to detect dual quasars for the study of the growth of galaxies and their supermassive black holes. These three detections are just the beginning of results to come with Subaru’s HSC, as the team obtains spectra of many more dual quasar candidates.