January 18, 2022
Kavli Institute for the Physics and Mathematics of the Universe (Kavli IPMU)

Appearing ten to a hundred times brighter at its peak, and with a much faster rise toward the peak, stellar explosions AT 2018cow (nicknamed the COW) and SN 2018gep (nicknamed the GEP) represent a new type of supernova called Fast Blue Optical Transient (FBOT), reports two recent studies.

Thanks to recent extensive supernova observations by several telescopes worldwide, COW and GEP appeared in the night sky in 2018 and were well-observed from the early phase of their explosions (figure 1). But their origin was a mystery.

To find a theoretical model, Shing-Chi Leung, a former Kavli Institute for the Physics and Mathematics of the Universe (Kavli IPMU) Project Researcher (currently a postdoctoral scholar at the California Institute of Technology), and Kavli IPMU Senior Scientist Ken’ichi Nomoto, organized two international teams of researchers to study each explosion, and have now succeeded in explaining COW and GEP features. 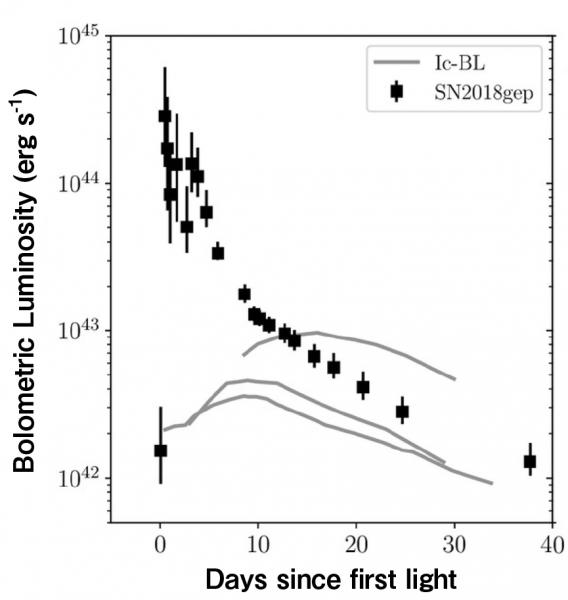 Both research groups then successfully modeled the light curve, uncovering a clear picture of a possible sequence of events in both explosions (figure 3).

First, the star would have ejected its surface materials just before the explosion. These ejected materials would have formed a dense and opaque circumstellar matter (CSM) around the star, making the radius of the star much larger than ordinary presupernova stars. Such a presupernova mass ejection mechanism might have been caused by the pulsational pair-instability of very massive stars, which Leung and Nomoto had previously seen while studying the origin of massive black holes (see the related article).

When the supernova explosion occurred in the star, a strong shock wave would have formed and propagated through the CSM. When it reached the CSM surface, its kinetic energy would have converted into thermal and radiation energy, causing a sudden and a very bright event to occur, which is consistent with the very fast rise of the observed brightness of the supernova.

The CSM surface became as bright as observed peak of COW because of the large "radius", but once CSM quickly lost most of its energy and faded, it became transparent, giving way to an ordinary supernova light. 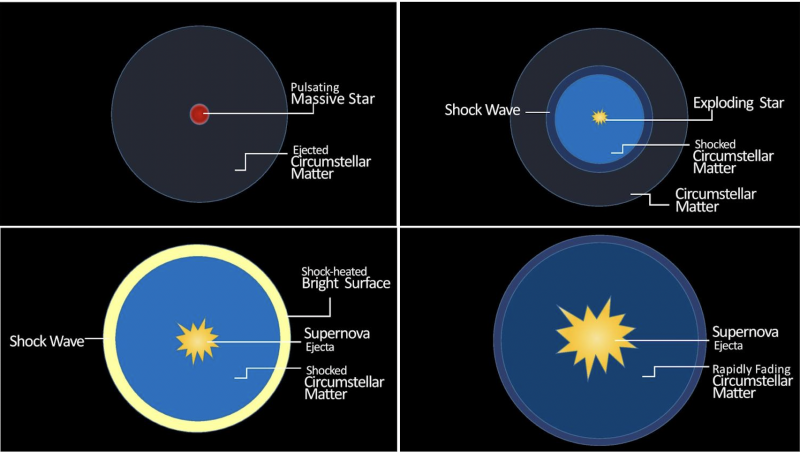 The theoretical supernova light curves powered by the shock-heating of the CSM the researchers created were found to be in good agreement with the observational data of the COW and the GEP, respectively (figure 4). 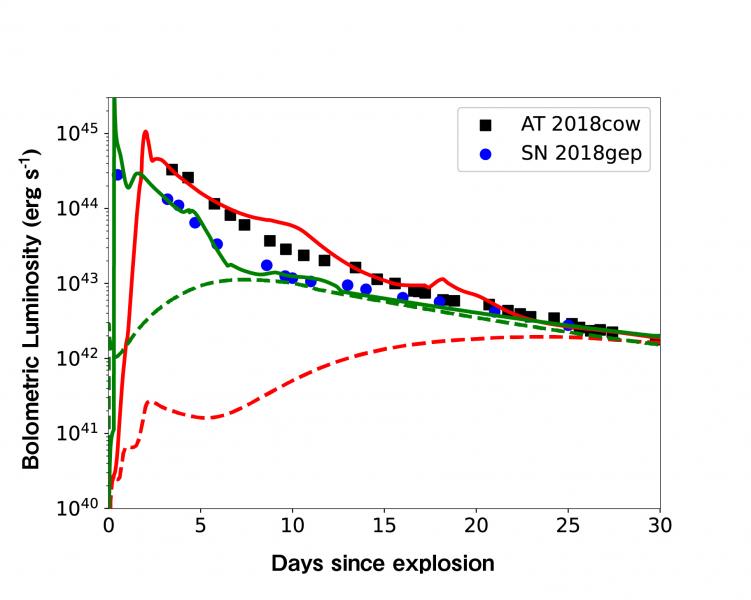 The researchers also found that without CSM, the rising of the light curve was much slower and the maximum luminosity was much lower, indicating FBOTs can be linked to CSM-heating.

The research teams are now proposing that the variation the CSM mass formed from the pulsational pair-instability of very massive stars would cause variation among FBOTs. If the CSM mass is large enough, the resulting supernova would be observed as a so-called Superluminous Supernova which is bright but shows much slower rising.

The next step is to confirm this hypothesis with more observations.

Research contact
Ken'ichi Nomoto
Senior Scientist
Kavli Institute for the Physics and Mathematics of the Universe (Kavli IPMU), The University of Tokyo
E-mail: nomoto_at_astron.s.u-tokyo.ac.jp
*Please change _at_ to @

Media contact
Motoko Kakubayashi
Press officer
Kavli Institute for the Physics and Mathematics of the Universe (Kavli IPMU), The University of Tokyo
E-mail: press_at_ipmu.jp
*Please change _at_ to @