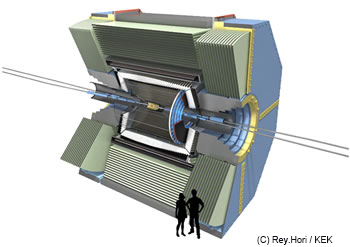 SuperKEKB is an energy-asymmetric e+ e- collider, which has the luminosity 40 times higher than its predecessor KEKB and produces large number of B and anti-B meson pairs. Optics tuning of electron and positron beams in SuperKEKB (Phase 1) had been carried out in 2016. The Belle II detector had been rolled in to the interaction point in April 2017, and all sub-detectors except vertex detectors had been installed into the Belle II detector by fall 2017. Combined commissioning of the accelerator and detector (Phase 2) has started in March 2018. SuperKEKB has successfully delivered the first collision of electrons and positrons in the morning of April 26, 2018, and Belle II has recorded the interaction event signals.

The Belle II detector is upgraded from the predecessor detector Belle to maximally exploit the high luminosity operation of SuperKEKB. The Kavli IPMU group had played a leading role for producing ladders of the silicon vertex detector (SVD) that is used to measure the decay vertices of B mesons. Production of SVD ladders requires advanced technologies: alignment of silicon sensors in each ladder in a precision of O(100µm), fabrication of ladder components with liquid glue with the controlled glue spread less than 1mm, electrical connections from sensor strips to readout ASIC with more than 10k wires with 25µm radius, quality assurance of the produced ladders over two years; each of which was developed by the group members. The ladder production had entirely finished in May 2018. The produced ladders were transported to KEK, Japan, and being mounted to the SVD end-rings. The whole ladders on the end-rings were tested using cosmic rays. The SVD and the other vertex detector PXD were combined in October 2018. After final testing, the vertex detectors were installed to the Belle II detector in November 2018. Physics data taking by the full Belle II detector (Phase 3) was kicked off on March 25, 2019, and the Kavli IPMU researchers are working hard on the Belle II analyses to uncover the new physics.