Researchers capture the first example of an extremely bright, and fast-evolving astronomical event in the distant universe

Researchers capture the first example of an extremely bright, and fast-evolving astronomical event in the distant universe 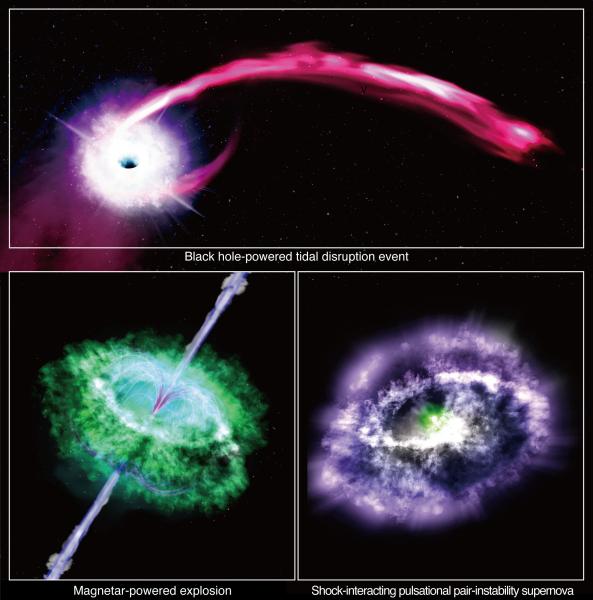 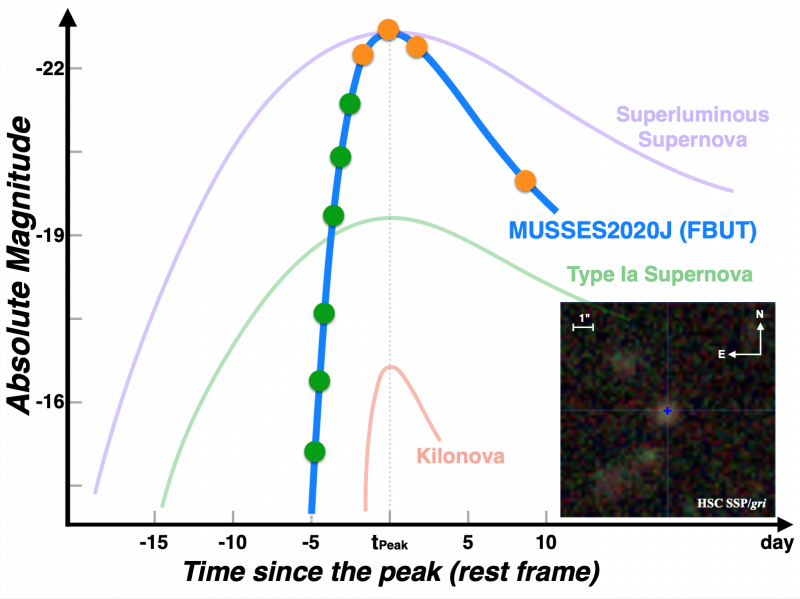 A team of astronomers have discovered a mysterious short-duration astronomical event, or transient, that was as bright as a superluminous supernova, but evolving much faster, reports a study in The Astrophysical Journal Letters published on July 12.

The universe is full of energetic transient phenomena, astronomical events that occur over a short period of time. For example, most massive stars end their lives by exploding spectacularly, known as a supernova, a major type of transients. In order to understand the origin of these transient phenomena, various time-domain surveys have been carried out in the past few decades. As more and more transients have been discovered, researchers began noticing some new transient types in recent years.

To figure out the nature of various transient phenomena, an international transient survey project called "MUltiband Subaru Survey for Early-phase Supernovae" (MUSSES), led by Ji-an Jiang, a former Kavli Institute for the Physics and Mathematics of the Universe (Kavli IPMU) Project Researcher (currently Project Research Staff at the National Astronomical Observatory of Japan (NAOJ)) attempt to catch various fast-evolving transients within one day of their occurrence, using the most powerful survey facility in the world, the Hyper Suprime-Cam (HSC) mounted on the 8.2-m Subaru telescope.

By carrying out consecutive Subaru/HSC observations in December 2020, 20 fast-evolving transients have been discovered, and one of them, MUSSES2020J (AT 2020afay), caught Jiang's attention.

"MUSSES2020J was discovered with very low brightness on December 11 in 2020, and its brightness showed significant brightening during our observation. More surprisingly, the fast light curve evolution and very high redshift of the transient confirmed by follow-up observations indicate that the brightness of MUSSES2020J was about 50 times higher, while the rising phase was much shorter than those of normal supernovae, which indeed show high similarity to a recently discovered peculiar transient, AT 2018cow. We suggest calling these extreme transients as Fast Blue Ultraluminous Transient (FBUT). So far only a handful of them have been discovered, and we had never seen one soon after its occurrence due to their extremely fast evolution. Thanks to the high-cadence survey mode and the excellent performance of Subaru/HSC, we were able to perfectly catch this amazing phenomenon for the first time. The early multiband light-curve data bring some unique information to understand the origin of these amazing transients," said first author Jiang.

The theoretical investigation is still ongoing, but the team has so far narrowed down the possibilities to a few scenarios, most of which involve an active compact object - either a black hole or a highly magnetized neutron star - to power these extremely bright objects.

"There is almost no doubt that an active compact object is involved, and it is a main reason why these transients are so different from normal supernovae. The remaining possibilities are an event where a star is tidally disrupted by a massive black hole, or a massive star collapse which is different from normal supernovae in a sense that it has probably left a highly active compact object like an accreting black hole. The very early-phase data provided for the first time for a class of FBUTs hints the existence of sub-relativistic outflow distinctly from a bulk of the slower ejecta, and this must be a key to solving the problem. We are currently checking the details of each model to robustly identify the origin of MUSSES2020J, with the strong constraint provided by this new observation," said Maeda.

"MUSSES2020J shows a similar light curve of AT 2018cow. The light curve of AT 2018cow is well-reproduced by the model of interaction between circumstellar matter and the ejecta of a pulsational pair-instability supernova (PPISN). The PPISN is the explosion of a very massive star which would collapse to form a black hole and eject the outer layer in a jet-like form. Therefore, it is possible that a similar PPISN model with a different amount of circumstellar matter can also explain the light curve of MUSSES2020J," Nomoto said.

Jiang's team will continue looking for the answer of the origin of this newly confirmed transient type by carrying out transient surveys with telescopes all over the world.

"Thanks to the great capability of the Subaru Hyper Suprime-Cam, we could find a very rare mysterious transient. As the main target of our observation was different, we could not carry out follow-up observations well. It may be a failed explosion event of a star, or it may be related to a massive black hole. Next time, as we know we can find these events, we can prepare follow-up observations to understand this kind of mysterious event," said Kavli IPMU Visiting Senior Scientist and University of Tokyo Professor Mamoru Doi.

Details of this study were published in the Astrophysical Journal Letters on July 12, 2022.

Research contact
Ken'ichi Nomoto
Senior Scientist
Kavli Institute for the Physics and Mathematics of the Universe (Kavli IPMU), The University of Tokyo
E-mail: nomoto_at_astron.s.u-tokyo.ac.jp
*Please change _at_ to @