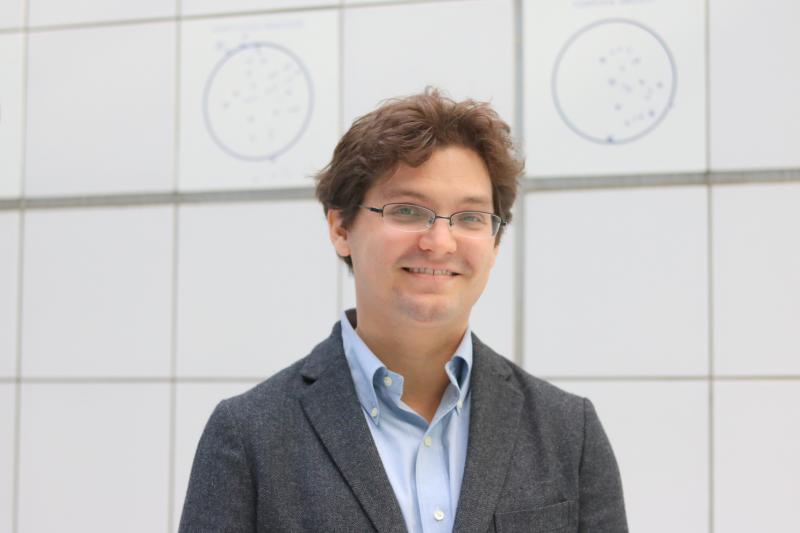 Tell me about what you’re working on right now.
I’m interested in how the galaxy population forms, why do we get big star forming galaxies, little star forming galaxies, or ones that aren’t doing much anymore, what causes them to vary in that way. That is a big question and you can tackle that in a lot of different ways, there’s a lot of different physics.

The way I come at this is I study the gas content of galaxies. And that’s important. Even though you look at pictures of galaxies and you can’t see the gas, it plays a key role because without that gas you can’t get stars which make the galaxies. So my project is focused on questions like what affects the amount of gas in galaxies, and then what affects how those galaxies turn gas to turn into stars.

At the moment, I’m mostly working on two projects with the MaNGA survey. MaNGA is an integral field unit survey so you get spectroscopy over the full galaxy. One of the useful things this lets us do is measure things like the motions of a galaxy across the full galaxy, the chemical composition, the stellar mass, the star formation rate, things like that. I’m using this data to try and understand the behavior of gas in galaxies.

The first project looks at the conditions for star formation within galaxies. You can look at star formation from two perspectives. You can think of it as it all depends on the local conditions of the gas, or you can start saying, well maybe the larger properties of the galaxy has an effect on the whole. What I’m doing with MaNGA is studying these two approaches to explain star formation.

The other project is looking at the motions of galaxies, so I’ve been working on a new method of characterizing the way galaxies rotate. So if you think of your perfect galaxy as rotating in circular motion, everything’s symmetric and normal. But not all galaxies are like that so what I’ve been doing is working on a new way of tracing the motion of the galaxies, and what I’ve found is that there are distinct patterns in which galaxies deviate from simple rotation. This is very interesting to me because it’s potentially due to some sort of gas infall, and I’m interested in the whole idea of how galaxies get gas.

So, when you’ve found the answers to your questions, what is the next step?
Something I want to do in the next stage of my research is to add the time axis to my analysis. Most of what I’ve done is look at properties of galaxies in the local universe, so that’s today. For example, I’ve studied the environments in which galaxies have a lot of gas and those with little gas, you can see that in this environment galaxies are very gas poor and you can speculate why. But it’s hard to narrow it down to explain why galaxies are a certain way without watching them evolve. You can’t do this for a singly galaxy because it takes billions of years, but you can look at populations of galaxies over time by looking at samples that are further and further away. I’d like to explore this with the HSC survey, which will allow me to see how galaxy structure and star formation changes with time, and ALMA telescope observations to follow how gas content changes with time. With these data, you can constrain how quickly galaxies are transforming, and this puts strong constraints on the physical processes that are acting on galaxies.

What has it been like doing research at the Kavli IPMU?
I would say generally very nice. They essentially make it as friendly to doing research as possible. It’s amazing the amount of flexibility they give everybody, you can come in and work whenever you want and you can collaborate with a lot of people. They always bring in visitors so there’s always new people to talk to.

It’s great that they’re so supportive of particularly the foreign researchers, helping them to avoid spending some much time trying to navigate Japan.

How did you end up deciding to study the gas in galaxies?
My interest in astronomy, I’m not really sure when that began, I think I always found it interesting and cool. I definitely had teachers that nurtured that interest. My middle school and high school physics teacher definitely encouraged my interest in astronomy and helped me get into that, actually helped me do a research project at high school.

Then in college, I knew I wanted to do astronomy, I didn’t know exactly what. But over time when you take all these different classes that focus on the solar system, and galaxies and cosmology. For some reason, galaxies really intrigued me. And the more I looked into them the more I found them interesting.

Then in grad school my advisor had this project on the gas content of galaxies, and in particular how you take your big gas reservoir and turn it into stars. And so I dove into that, and I found it very interesting, and it opened a bunch of new questions that I wanted to get into, and it took off from there.

Where can we find your work?
There's a summary of my work and publications on my website: http://member.ipmu.jp/david.stark/index.html