March 8, 2022
Kavli Institute for the Physics and Mathematics of the Universe (Kavli IPMU)

On 24 April 2022 (Sun), the Kavli IPMU will host it's 15th anniversary symposium titled, "World Premier International Research Center Initiative (WPI) Kavli IPMU's 15 years of Science and Future Prospects: Solving the Mystery of the Universe with a Mathematician, Physicist, and Astronomer". There will be four lectures, and five video messages from various people reflecting on the past, present and future of our institute. This event will be online, but pre-registration is required. Registrations close APRIL 22. We look forward to seeing you there. 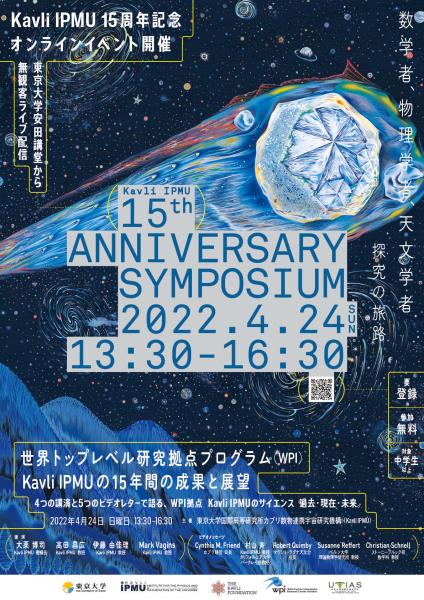 Exploring the Dark Universe with the Subaru Telescope

Since the beginning of Kavli IPMU, I have been working to uncover the identity of dark matter and dark energy in our universe through an international collaboration project using the 8.2m Subaru Telescope in Hawaii. Progress has leaped forward in the past 15 years, and we were able to produce Observation Cosmology, a research field aimed at studying the vast universe itself. Thanks to gravitational lenses predicted by Einstein, we have managed to study the distribution of dark matter even though we cannot directly observe it with light. As the Kavli IPMU grew, we have been able to make a map of dark matter in the universe, and study primordial black holes, a candidate for dark matter. My talk will be an overview of my research that has taken place at Kavli IPMU these past 15 years.

The Mystery of Singularities

Speaker profile: After finishing her PhD in Mathematical Sciences at the University of Tokyo, Ito went on to become a Research Assistant at Tokyo Metropolitan University, then Associate Professor at Nagoya University. She joined the Kavli Institute for the Physics and Mathematics of the Universe in 2017 as Professor. Her research field is mathematics, particularly algebraic geometry. She currently serves as a member of the Science Council of Japan, and has published several popular science books about mathematics.

Supernova Neutrinos Without the Annoying Wait

Regarding the detection of supernova neutrinos, the waiting is the hardest part. The last, and so far only, observed supernova neutrinos came from the SN1987A explosion thirty-five years ago, and we've been hoping to see some more ever since. Now, a groundbreaking Kavli IPMU innovation will allow the famous Super-Kamiokande detector to continuously record neutrinos from distant, ancient supernova explosions scattered across the known universe. As a result, we will no longer have to wait!

Speaker profile: Originally from the United States, Prof. Mark Vagins received his physics education at Caltech and Yale University, and joined the Super-Kamiokande project, then under construction, in 1994. An expert in neutrinos and particle detector technology, he was the first foreign professor hired by IPMU after its founding in 2007.

*Note: Simultaneous interpretation from Japanese into English will be available throughout this program.