December 6, 2022
Kavli Institute for the Physics and Mathematics of the Universe (Kavli IPMU) 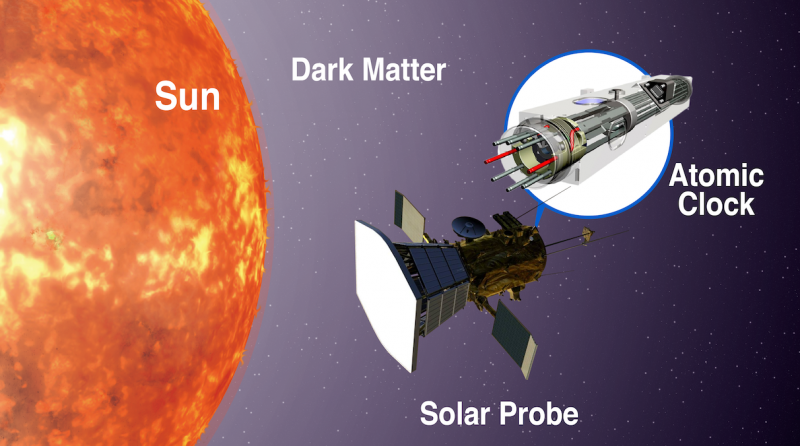 Studying an atomic clock on-board a spacecraft inside the orbit of Mercury and very near to the Sun might be the trick to uncovering the nature of dark matter, suggests a new study published in Nature Astronomy.

Dark matter makes up more than 80 per cent of mass in the universe, but it has so far evaded detection on Earth, despite decades of experimental efforts. A key component of these searches is an assumption about the local density of dark matter, which determines the number of dark matter particles passing through the detector at any given time, and therefore the experimental sensitivity. In some models, this density can be much higher than is usually assumed, and dark matter can become more concentrated in some regions compared to others.

One important class of experimental searches are those using atoms or nuclei, because these have achieved incredible sensitivity to signals of dark matter. This is possible, in part, because when dark matter particles have very small masses, they induce oscillations in the very constants of nature. These oscillations, for example in the mass of the electron or the interaction strength of the electromagnetic force, modify the transition energies of atoms and nucleii in predictable ways.

An international team of researchers, Kavli Institute for the Physics and Mathematics of the Universe (Kavli IPMU) Project Researcher Joshua Eby, University of California, Irvine, Postdoctoral Fellow Yu-Dai Tsai, and University of Delaware Professor Marianna S. Safronova, saw potential in these oscillating signals. They claimed that in a particular region of the Solar System, between the orbit of Mercury and the Sun, the density of dark matter may be exceedingly large, which would mean exceptional sensitivity to the oscillating signals.

These signals could be picked up by atomic clocks, which operate by carefully measuring the frequency of photons emitted in transitions of different states in atoms. Ultralight dark matter in the vicinity of the clock experiment could modify those frequencies, as the oscillations of the dark matter slightly increase and decrease the photon energy.

“The more dark matter there is around the experiment, the larger these oscillations are, so the local density of dark matter matters a lot when analyzing the signal,” said Eby.

While the precise density of the dark matter near the Sun is not well-known, the researchers argue that even a relatively low-sensitivity search could provide important information.

The density of dark matter is only constrained in the Solar System by information about planet orbits. In the region between the Sun and Mercury, the planet nearest to the Sun, there is almost no constraint. So a measurement onboard a spacecraft could quickly uncover world-leading limits on dark matter in these models.

The technology to put their theory to the test already exists. Eby says the NASA Parker Solar Probe, which has been operating since 2018 with the help of shielding, has travelled closer to the Sun than any human-made craft in history, and is currently operating inside the orbit of Mercury, with plans to move even closer to the Sun within a year.

Atomic clocks in space are already well-motivated for many reasons other than searching for dark matter.

“Long-distance space missions, including possible future missions to Mars, will require exceptional timekeeping as would be provided by atomic clocks in space. A possible future mission, with shielding and trajectory very similar to the Parker Solar Probe, but carrying an atomic clock apparatus, could be sufficient to carry out the search,” said Eby.

Details of their study were published in Nature Astronomy on December 5.

Research contact
Joshua Eby
Project Researcher
Kavli Institute for the Physics and Mathematics of the Universe (Kavli IPMU), The University of Tokyo
E-mail: joshua.eby_at_ipmu.jp
* Please change _at_ to @